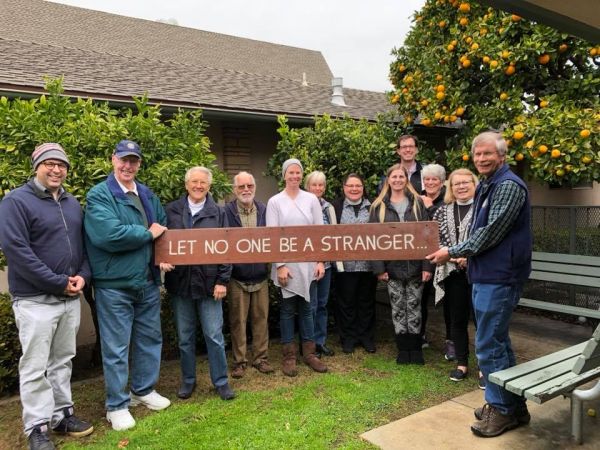 The Vestry is the legal representative of the parish with basic responsibilities to help define and articulate the mission of the congregation; to support the church's mission by word and deed, to ensure effective organization and planning, and to manage resources and finances.

In the Episcopal church, the number of vestry members and the term of office varies from parish to parish, and Vestry members are usually elected at the annual parish meeting.

I was raised in the Episcopal Church. I moved to Ventura in 1987 and have attended St. Paul’s Ventura since 1990. I have served on the vestry several times (including as senior and junior warden) and volunteered in a wide range of ministries here: music, Altar Guild, floral arts, gardening, DOK, digital disciples, Sunday School, as a representative to convention, and more. I work as an author, academic, and digital strategist for the University of California. I also have my own communications consulting practice. My academic specialty is food/agriculture, history and digital communications. Through my previous work with 4-H and Master Gardeners, I have gained significant experience in non-profit management, including fund development, board governance, and volunteer management. I hold four degrees from UC Santa Barbara: a BA in English, Masters in both Education and History, and a PhD in U.S. History. I am married to Bill, an attorney in private practice. We have a 22-year old daughter – Natalie - who is in her first year at the University of Oregon Law School. Outside of work, I enjoy exploring the world, writing, books, gardening, my companion animals, and helping people in any way that I can. St. Paul’s is where my heart is…I am passionate about this community and the ways we see and serve Christ in others. If elected, I promise to work hard - with optimism, creativity and spirit -to support the growth of our parish and its ministries.

My name is Glenwood Bretz. Most people call me Woody.

I was born in Kingman, Arizona in 1944and moved all over the western United States during my childhood. I lived in Ventura on and off from 1948 to 1956. I had such fond memories of the areathat I moved backafter six years of service on Submarines in the US Navy and have been a continuous Ventura County resident since 1969.

I retired from employment by the Department of the Navy after 35 years as a supervisory mechanical engineer doing research on amphibious operations technologies. I continue to consult to both US Army and Navy commands on amphibious and near shore operations technologies. My wife Louise and I have been teaching West Coast Swing dancing for the last 25 years and I also act as a Swing and Country and Western DJ at various local and statewide venues. I enjoy volunteering with the local Friends of the Library helping with book sales.

Louise and I have attended St. Paul's Episcopal Church since 1995 and were married by Father Jerry Kahler in the church in 1996.Our two daughters, Marina and Charlotte were baptized into the church in 2001. Our family has progressed through nursery, Sunday school, and now youth group.We have participated in regular Sunday services, and pretty much any activity that we can with the church. Louise is a member of the altar guild, a counter for the offertory and dance teacher for the hoedown. I am a regular volunteer for Ushering, Lay Readership, and Lockup, I was a member of the discernment committee and was on the Vestry from2014 through 2016. Iam an active member of Building and Grounds, Comprehensive Growth Project Oversight Committee and the Risk Management Committee. Outside of work and church, I enjoy family camping, hiking, hunting, golf, books, music and watching my daughters grow up.

Hello! I’m Ted Andrews.I grew up in the Bay Area, but spent eight years in the greater Boston area for high school and college, before moving to southern California in 2004, where I was lucky enough to meet my amazing wife, Laura. While dating, we attended All Saints’ Episcopal in Beverly Hills, and we were married there in 2015. After having our son, Axel, we moved to the Ventura area and were blessed to find St. Paul’s.A bit about my background in the church: When I was growing up, my grandmother was very involved in raising me, which included bringing me along to church work – first in Aptos, CA and, when she moved to South Carolina, at her home church of St. Bartholomew’s Episcopal in North Augusta.I attended an Episcopal high school and Laura and I were married in the Episcopal Church.I have seen again and again the power of Christian effort and the Episcopal way to achieve good works.Laura and I have greatly enjoyed participating in the church community as members of the hospitality group, the Choir, the floral committee, and the Lay Readers, and are excited to continue participation in the church’s ministries. We were also thrilled to have Axel baptized here in November. I am honored, and also excited, to stand for Vestry.

St. Paul's has been a special place for my husband, Ralph, and myself for over 37 years. Our youngest son, Danny, was baptized here and later with his older brother, Jesse, attended St. Paul's Day School. I was also privileged to serve a term on the school board. St. Paul's has provided me with many opportunities for service. I, along with Gigi Denniston , were the first female LEMS at St. Paul's and I still continue in that capacity. I also did serve two terms on the Vestry. I am excited by St. Paul's new expanded growth and outreach and welcome the opportunity of again being a vestry member.

I’m a lifetime Episcopalian. I was a member of my former parish for over 50 years. I joined St Paul’s four years ago when My husband Bill and I moved to Ventura. I have been involved in Lay Eucharistic ministries, Pastoral Care, Outreach and youth groups over the years. Small group ministries and Bible study are very important to me. My career opportunities have been in the nursing and hospitality fields. I have been blessed with four children two stepchildren and ten amazing grandchildren.

Since joining St Paul’s I have enjoyed meeting and working with some very special individuals. It is an honor to be of service on the Vestry.

I have been a member of St. Paul’s Ventura since 2009. Having grown up in a charismatic church, I was later drawn to the Anglican tradition, and began attending Christ the King Episcopal Church in Goleta. I was confirmed at St. Paul’s in 2011. After receiving a BA in religious studies at Westmont College, I earned an MA in Theology with an emphasis in biblical studies from Fuller Theological Seminary. I currently manage Copperfield’s, a gift store in Downtown Ventura. Anna and I were married by Rev. Susan at St. Paul’s in 2014, and we live in Ventura with our wonderful daughter Pippa.

I grew up going to St. Columba's Episcopal Church in Big Bear where my family was very involved and where I was baptized and confirmed. My husband and I started coming to St. Paul's after our daughter was born about two years ago. Our family feels so blessed by the community we have found here and the faith that is nourished.

I am currently a full-time mama to Rosie (3) and Jamie (18 months) and wife to Tom. My professional background is in social work. I am a licensed clinical social worker and until our daughter was born worked specifically with older adults in the elder abuse field. Now my social work education is tested daily by two strong-willed toddlers!

I'm the mother of three sons. One is married and entering law school, the other two are seniors in college. I am a pediatric and post-partum nurse at CMH. I've been a nurse for 12 years. I recently bought a house and am enjoying working on it and decorating, and I adopted a three-legged dog named Walter. I enjoy quilting, art journaling, and visiting the Eastern Sierras. I have been a member of St. Paul's since 2011.

I am a native Venturan and I have attended St. Paul’s for almost 15 years, and have been a member for 14 years. Both my children, Gabriel and Maryanne, have been baptised here and have grown up in the church. I am a member of the choir, I teach Sunday School, and I serve on the Flower Guild with my children. Outside of church, I work as a full-time Medical Assistant for Kaiser Permanente, and I have a home business selling LuLaRoe clothing. I have my Bachelor of Music in voice and my Master of Music in voice from CSUN.

Ruth has participated in worship, music, pastoral, hospitality, outreach and prayer & service ministries here at St. Paul’s. She has also served on the Vestry and as Senior Warden many times over the years. I believe she now holds the title of longest continuous membership here! I’ll let you ask her how many years that may be…. Through ups and downs and many, many changes, Ruth continues her faithful service here. (written by Paula R. ☺)

Dan was baptized and confirmed at St. Paul's. He is an emeritus professor of Political Science at CSU Channel Islands who recently retired after 30 years of service in the California State University system. He was part of the team that established CSU Channel Islands. He now serves as a volunteer naturalist at Channel Islands National Park and on the board of the Abundant Table. He lives in Ventura with his wife Joanne and son Andrew.