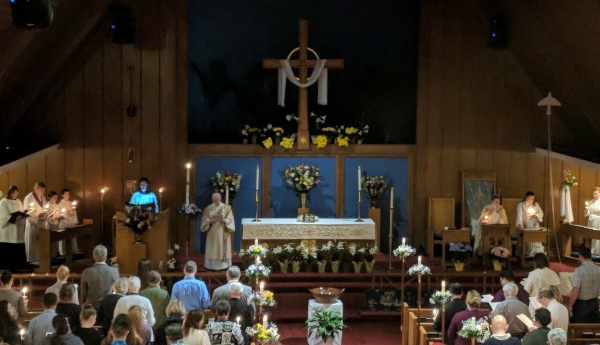 This tenor solo - Mit Würd' und Hoheit angetan - is from Franz Joseph Haydn (1732-1809) oratorio, The Creation (Die Schöpfung). It was going to be a live musical offering for St. Paul's Easter Vigil service, connecting with the first reading of the service in the church from Genesis, and is now being offered as a virtual musical offering in celebration of Easter Vigil instead.

While in London, Haydn was moved by the performance of George Frideric Handel’s oratorios. After returning to Vienna, he started work on the oratorio The Creation.

This text had been translated into German by Baron Gottfried van Swieten, and the text was created in a way to enable performances in either German or English. The libretto was based on the poem Paradise Lost by John Milton and the Genesis book of the Bible. The Creation was first publicly performed in 1798 and earned popularity.

Easter Vigil readings originally featured twelve Old Testament readings, but now it varies. The Episcopal Church chooses from nine. The Genesis reading of the "Creation" is usually read at Easter Vigil services to remind us of the beautiful work God has done for us and the world.

Photo by Z I on Unsplash


Take out of your day and join us for the Liturgy of Healing this week, April 29th at 9am. Hear and say prayers for ourselves and others in this beautiful service with Reverend Liz Williams via Zoom.


Our Wednesday morning Bible study is working through The Path from the Forward Movement (Author), Melody Wilson Shobe (Editor), David Creech (Editor). From the description from Amazon: “The Path: A Journey through the Bible is an opportunity to walk through the Bible in an easy and accessible format. The Path is the story of the Bible, excerpted and condensed from the New Revised Standard Version.”

We have already begun this book in our Wednesday morning Bible Study, however, we invite you to join us at any point. We pray and read and talk about what speaks to us in the Scripture.

The book is available in paperback, audio and kindle.

Join us on Wednesday mornings at 10:30am via Zoom:
https://us02web.zoom.us/join

Our choir continues to meet every Thursday evening during this time of #holydistancing. If you are interested in joining us, please email our Music Minister, Dr. Felix Eisenhauer, at [email protected] All are welcome.