Episcopal Bishop of Diocese of Los Angeles speaks to ongoing protests, racism and the Way of Love 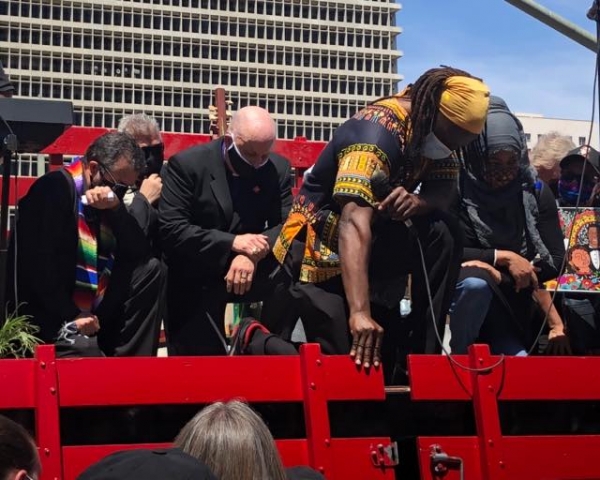 A Word to the Episcopal Diocese of Los Angeles

My siblings in Christ:
In the life of nations, moments come when the person of faith must ask: “What am I to do?”

Let’s go back to the 15th year of the reign of Emperor Tiberius. His proconsul, Pontius Pilate, ruled Judea, and his puppet, Herod, was king in Galilee. As we learn in the third chapter of Luke’s gospel, this was when John the Baptist came onto the scene, calling on the crowds to “bear fruits worthy of repentance.”

The crowds wanted him to be more specific. They said, “What then should we do?” John’s first answer was about personal ethics. He said that those who had a second coat or extra food should share them, making manifest their love of their neighbor.

The next two answers were to officials who lorded their power over oppressed people. In John’s time, the people coming down to see him at the Jordan River had neither constitution nor franchise. All they had was a prophet promising that God would punish tax collectors and soldiers who abused their authority.

Luke identifies these and John’s other exhortations as “good news,” which is to say gospel. After Herod killed John, our Lord and Savior Jesus Christ built his ministry on the framework the Baptist had built.

Opposition to the unjust use of power lies at the heart of our formation as Christians.

It does mean that, as Christ did, the body of Christ must exhibit unique sensitivity toward the powerless, the marginalized, and the oppressed, especially when they are victimized by systems of power and privilege.

This isn’t politics. This is the gospel of our Lord and Savior Jesus Christ. When the Christian keeps talking about the brutal murder of George Floyd when there are so many dedicated police officers who risk their lives daily, remember John the Baptist. When the Christian keeps talking about white supremacy and institutionalized racism without mentioning looters and violent protestors as often as some might like, remember the gospel’s abhorrence of unjust state power, such as that which killed Jesus.

In recent days, followers of the Prince of Peace have had the additional challenge of applying gospel values to the use of federal power. I join with Presiding Bishop Michael Curry and Bishop Mariann Edgar Budde of the Diocese of Washington in opposition to President Trump’s photo opportunity Monday night at St. John’s Episcopal Church, especially because potentially lethal force was used to clear his way. By the same token, sending military forces into our cities, as the president has threatened, would only add to the chaos in neighborhoods already convulsed with rage and unrest.

Others will come to their own conclusions about the president’s actions. Whatever Christians may decide, decide they must. Questions about the just use of state power are foundational to Christian faith and practice. We can imagine that it was important to John and our Lord because they realized that there was no one else to hold power accountable. They also understood, as we do in our time, that abuses of power most often afflict the powerless, marginalized, oppressed, and scapegoated as well as those who are the victims of institutional racism and other prejudices.

These were those with whom Jesus spent most of his time. The Christian also thinks of them first, lifts them up, walks with them, and even puts them ahead of ourselves as inheritors of the earth and the kingdom of God (Matt. 5:3-12) — by our preaching and teaching, advocacy before our political leaders, peaceful demonstrations, and encouragement of voting and voting rights.

We do this work nationally, regionally, locally, and personally. We proclaim the gospel wherever we are. The rain may fall equally on the good and wicked. But the effects of the pandemic and institutional racism are falling far harder on the less privileged. As a result, our work is plentiful.

Remembering Jesus and John’s preference for the unheard, I might call a relative or friend living in a nursing home who may be feeling especially isolated in quarantine. I might support legislation to help undocumented essential workers, who are at greater risk of infection, helping feed us all, and yet silenced and powerless, lacking in rights and representation.

In church, I might wonder about unheard neighbors in my midst and speak up for offering worship and fellowship in all the languages being spoken in my neighborhood. Remembering our 40 million unemployed nationwide, I might make an additional donation to the church food pantry and or speak up for the unhoused at a city council meeting.

The gospel equips us well to look after one another in this way, especially our siblings who are most at risk. As St. Paul wrote to the church in Corinth, which was experiencing an episode of factionalism, of people divided against one another over preference and precedence, "The body does not consist of one member but of many."

As you think about the events of these days and decide about how soon you wish to be physically present during worship once again, Bishop Bruce, Canon McCarthy, all your servants at St. Paul’s Commons, and I will keep you in our daily prayers. In the meantime, please join me in saying this prayer for guidance:

Direct us, O Lord, in all our doings with your most gracious favor, and further us with your continual help; that in all our works begun, continued, and ended in you, we may glorify your holy Name, and finally, by your mercy, obtain everlasting life; through Jesus Christ our Lord. Amen.

Yours in Christ’s love,


After over 125 years in Ventura, St. Paul’s continues to keep the faith by bringing glory to God and benefit to all people. We are a friendly and inviting community. This is a place to worship, celebrate, explore, question and grow. We celebrate our unity in Christ while honoring our differences, always putting the work of love before uniformity of opinion. All are welcome to find a spiritual home here. The fact that we have different opinions makes our discussions all the more interesting. We strive to love our neighbors as ourselves and respect the dignity of every person.

On Sundays you will find traditional worship anchored in an ancient faith, dynamic preaching connecting that faith with our lives today and a call to serve as the Light of Christ to a world in need.

All are welcome! Please join us afterwards for our Zoom virtual coffee hour!
Join us on Facebook Live through our Facebook page  (https://www.facebook.com/saintpaulsventura/ ) or via YouTube (https://www.youtube.com/channel/UCUxBGEfq4JhEPqjz07hbpVg) for our streaming Sunday Service.


Take out of your day and join us for the Liturgy of Healing this week, April 29th at 9am. Hear and say prayers for ourselves and others in this beautiful service with Reverend Liz Williams via Zoom.


Our Wednesday morning Bible study is working through The Path from the Forward Movement (Author), Melody Wilson Shobe (Editor), David Creech (Editor). From the description from Amazon: “The Path: A Journey through the Bible is an opportunity to walk through the Bible in an easy and accessible format. The Path is the story of the Bible, excerpted and condensed from the New Revised Standard Version.”

We have already begun this book in our Wednesday morning Bible Study, however, we invite you to join us at any point. We pray and read and talk about what speaks to us in the Scripture.

The book is available in paperback, audio and kindle.

Join us on Wednesday mornings at 10:30am via Zoom:
https://us02web.zoom.us/join